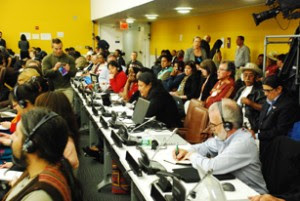 Item 3 Discussion on the special theme for the year:  "The Doctrine of Discovery: its enduring impact on indigenous peoples and the right to redress for past conquests (articles 28 and 37 of the United Nations Declaration on the Rights of Indigenous Peoples)."

The Global Caucus recommends that the Permanent Forum acknowledge that the doctrine of discovery, both in theory and in on-going practice, constitutes the subjugation of peoples to alien subjugation, domination and exploitation.  It is the denial of fundamental inherent human rights, is contrary to the Charter of the United Nations and is an impediment to the promotion of world peace and cooperation.

Further, we implore the Permanent Forum to acknowledge and to transmit to other agencies of the United Nations that the doctrine of discovery is an expression of racism, xenophobia and discrimination - that it represents a regime of systematic oppression and domination by one racial or religious group over another, and it is committed to the intention of maintaining that regime. As such, the continuing operation of the doctrine of discovery should be recognized as a crime against humanity and should be condemned as such.

We propose, as the Permanent Forum's Expert Group Meeting next year, the development of models and mechanisms for conflict resolution, restitution, redress and peace-building using the framework offered through the operation/implementation of articles 27, 28 and 40 of the UN Declaration on the Rights of Indigenous Peoples.

The proposed focus would be to discuss and make proposals for the development of such mechanisms at the national and international levels.

The Expert Group Meeting would serve as an opportunity for Indigenous peoples of the various regions of the world to discuss the development of mechanisms for reparations, non-recurrence and conflict resolution, taking into account as well Articles 18 and 19 of the Declaration regarding participation and Free, Prior and Informed Consent.

In this regard, we further propose the inclusion of Indigenous knowledge, innovations and practices in the EGM.  Indigenous youth and Indigenous women must be among the experts included at the EGM.

We further recommend that the UNPFII prepare an International Study on the dominating, dehumanizing, and terracidal effects of the international construct known as "the Doctrine of Discovery" upon the health, physical, psychological, social, well-being, human and collective rights, lands, resources, medicines, titles to such lands, resources, medicines - and particularly on Indigenous women as manifested in forms of conceptual and behavioral violence against them.  The Study will be submitted to the UNPFII in 2014 as an addendum to the UN Year of Indigenous Peoples, with recommendations addressing the issues of the discoveries and findings of this Study.

We appreciate and endorse the inclusion of the concept of environmental violence in the report of the UNPFII international expert group meeting entitled "Combating violence against indigenous women and girls: article 22 of the United Nations Declaration on the Rights of Indigenous Peoples" submitted under item 3 of the 11th Session, and encourage the Permanent Forum to continue addressing this critical matter in future discussions.

We endorse the Statement of the Indigenous Women's Caucus under Item 3 to this Session of the Permanent Forum. We anticipate the report of the 2nd International Indigenous Women's Environmental and Reproductive Health Symposium and look forward to working with Permanent forum and Indigenous Peoples to implement its recommendations.

Further to this endorsement, we propose that an International Study be carried out providing review and assessment of all UNPFII recommendations, including their implementation, respecting Indigenous women with a particular focus on the dehumanization and violence against Indigenous women.  Indigenous women should be specifically consulted and recognized for their expertise on these matters.  The proposed study would canvas a wide range of issues and challenges, such as the role of women in the creative innovations of Indigenous cultures and knowledge systems, maternal health and related rights, and the lack of protection of rights of Indigenous women under domestic legislation such as labor laws, criminal laws and environmental laws.

Further to article 29 and 32 of the UN Declaration, that the theme of the UNPFII 13th Session be focused on Mining and Extractive Industries and impact on Indigenous peoples within the context and the mandate of the UNPFII.  We also propose as a future theme the criminalization of Indigenous Peoples in the exercise of their rights.

We also encourage you to consider including a half-day focal discussion on the critical issue of the World Bank, its impacts on Indigenous Peoples, and policy changes needed to implement the UN Declaration.

Finally, we recommend that permanent seats in the United Nations General Assembly be established for Indigenous Peoples.

In conclusion, we are cautious in light of the fact that through the continued use of non-Indigenous languages, terminology and perspectives in describing the doctrine of discovery, we may inadvertently encourage the reproduction of such perspectives amongst our own peoples. The Doctrine of Discovery is a multi-faceted concept.  The Global Caucus understands the concept of the doctrine of discovery as applying worldwide, not limited to Christian or European colonization and domination.  The same inhumane treatments have and continue to be imposed upon Indigenous Peoples in all regions of the world, perpetuating exclusion, racism and discrimination, alienation from decision making processes and "invisibility" within state institutions, even within the international fora.

It must be recognized that in fundamental terms, the doctrine of discovery challenges the just claims of Indigenous Peoples, in particular with respect to processes of decolonization and the implementation of Article 3 of the Declaration respecting self-determination.

The discussion of the doctrine of discovery must include reference to domestic legislation of member states, such as immigration legislation, as well as challenge the establishment of state borders, which do not reflect the traditional lands and territories of Indigenous peoples, that have been established further to the doctrine of discovery.  We fundamentally disagree with the current practices of states to criminalize the movements of Indigenous Peoples across borders.

The doctrine may be understood in contemporary terms as a Doctrine of Development, with Indigenous peoples and Mother Earth subject to domination and subjugation under corporate hands. State governments facilitate the doctrine of discovery for the purpose of development and privilege the rights of corporations while negating, derogating and abrogating the rights of Indigenous Peoples.

We draw the attention of the Permanent Forum to the recent recommendations of the Committee on the Elimination of Racial Discrimination in their reviews of Canada and the United States, which require the state parties to take measures to prevent transnational corporations registered in Canada and the United States from carrying out activities that negatively impact on the enjoyment of the rights of Indigenous Peoples in territories outside their state borders, and hold them accountable.  Furthermore, national and international financial institutions, including banks, contribute to criminal and detrimental activities that violate the rights of Indigenous peoples.  Issues related to lands, waters and other territories of Indigenous Peoples are not limited to actions of the private sector or state governments.  The Global Caucus is deeply concerned about the militarization of Indigenous waters, lands and territories where such lands and territories are rich in natural resources. In effect, Indigenous Peoples are being killed or displaced to "clear the land" for development.

Posted by chantlaca at 7:58 AM