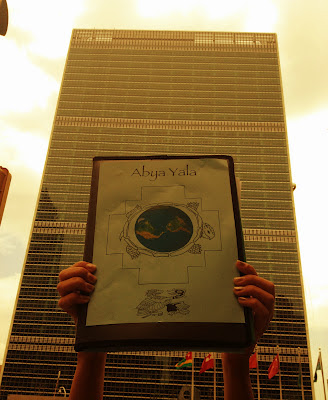 
Discussion on the special theme for the year:
“The Doctrine of Discovery: its enduring impact on indigenous peoples and the
right to redress for past conquests
(articles 28 and 37 of the United Nations Declaration on the Rights of Indigenous Peoples)”


1. The Permanent Forum recalls the fourth preambular paragraph of the United Nations Declaration on the Rights of Indigenous Peoples, which affirms that all doctrines, policies and practices based on or advocating superiority of peoples or individuals on the basis of national origin or racial, religious, ethnic or cultural differences are racist, scientifically false, legally invalid, morally condemnable and socially unjust.  Legal and political justification for the dispossession of indigenous peoples from their lands, their disenfranchisement and the abrogation of their rights such as the doctrine of discovery, the doctrine of domination, “conquest”, “discovery”, terra nullius or the Regalian doctrine were adopted by colonizers throughout the world. While these nefarious doctrines were promoted as the authority for the acquisition of the lands and territories of indigenous peoples, there were broader assumptions implicit in the doctrines, which became the basis for the assertion of authority and control over the lives of indigenous peoples and their lands, territories and resources.  Indigenous peoples were constructed as “savages”, “barbarians”, “backward” and “inferior and uncivilized” by the colonizers who used such constructs to subjugate, dominate and exploit indigenous peoples and their lands, territories and resources.


2.   The ongoing manifestations of such doctrines are evident in indigenous communities, including in the areas of: health; psychological and social well-being; denial of rights and titles to land, resources and medicines; conceptual and behavioural forms of violence against indigenous women; youth suicide; and the hopelessness that many indigenous peoples experience, in particular indigenous youth.


3.   Another ongoing manifestation of dispossession doctrines is the concept of extinguishment, found in the regulations, policies and court decisions in which States have purportedly “extinguished” the rights of indigenous peoples to their lands, territories and resources, their right to self-determination, their languages, religions and even their identities and existence through the notion of “recognition”, that is by recognizing some and not recognizing others as indigenous.  “Extinguishment”, in the context of indigenous peoples’ rights to lands, territories and resources is inconsistent with the contemporary understanding in international law, specifically the peremptory norm of the absolute prohibition against racial discrimination. No other peoples in the world are pressured to have their rights “extinguished”.


4.   Article 26 of the United Nations Declaration on the Rights of Indigenous Peoples, treaty body jurisprudence and case law from all major international human rights institutions confirm that indigenous peoples hold collective rights to the lands, territories and resources that they have traditionally owned, occupied or otherwise used, and that respect for their customs, traditions and land tenure systems is owed to them. Such rights have the same legal status as all other property rights to lands, territories and resources. States are no longer allowed to deploy positivist legal interpretations of laws adopted during an era when doctrines such as terra nullius were the norm. International human rights law, including norms on equality and non-discrimination such as those affirmed in the International Convention on the Elimination of All Forms of Racial Discrimination and the United Nations Declaration on the Rights of Indigenous Peoples, demand that States rectify past wrongs caused by such doctrines, including the violation of the land rights of indigenous peoples, through law and policy reform, restitution and other forms of redress for the violation of their land rights, including those referred to in articles 27 and 28 of the United Nations Declaration.


5.   During its tenth session, the Permanent Forum emphasized that redefining the relationship between indigenous peoples and the State as an important way to understand the doctrine of discovery and a way to develop a vision of the future for reconciliation, peace and justice. To that end, the United Nations Declaration on the Rights of Indigenous Peoples provides a strong human rights framework and standards for the redress of such false doctrines, notably in articles 3, 28 and 37. The Permanent Forum encourages the conduct of the processes of reconciliation “in accordance with the principles of justice, democracy, and respect for human rights, equality, non-discrimination, good governance and good faith”.


6.   The Permanent Forum recommends that States include in all education curricula, in particular the school system, a discussion of the doctrine of discovery/dispossession and its contemporary manifestations, including land laws and policies of removal.


7.   The Permanent Forum welcomes the recommendation to establish a voluntary international mechanism to receive and consider communications from indigenous peoples specifically concerning their claims to, or violations of, their rights to the lands, territories and resources which they have traditionally owned, occupied or otherwise used or acquired. This recommendation deserves further elaboration by indigenous peoples and others concerned. The Forum takes note of the mandate of the Special Rapporteur on the rights of indigenous peoples in this regard.


8.   The Permanent Forum recommends that States and the United Nations system, with particular attention to the activities of the United Nations Children’s Fund (UNICEF) and the World Health Organization (WHO), introduce indigenous youth perspectives into existing youth policies and plans, including the five-year action agenda of the Secretary-General to address health issues. In addition, there should be a distinct focus on indigenous youth by improving participation in decision making and by introducing and including mental health services for young people, with particular efforts to address suicide among indigenous youth.


10. The Permanent Forum calls on all States to ensure that their political
institutions and structures are not used as a reason to relieve the State of its responsibility to implement international human rights obligations in relation to the rights of indigenous peoples.


11. The Permanent Forum calls on States to ensure that racial non-discrimination is guaranteed in their constitutions. The term “racial discrimination” means any distinction, exclusion, restriction or preference based on race, colour, descent or national or ethnic origin that has the purpose or effect of nullifying or impairing the recognition, enjoyment or exercise, on an equal footing, of human rights and fundamental freedoms in the political, economic, social, cultural or any other field of public life. The Forum calls on States to adhere to the peremptory norm and the absolute prohibition against racial discrimination as well as all other forms of discrimination, including gender and age.


12. The Permanent Forum recommends that the relevant United Nations agencies and Member States with reindeer herding peoples support training and education programmes for indigenous reindeer herding youth and communities in order to secure the future sustainability and resilience of the Arctic and sub-Arctic indigenous pastoral reindeer herding societies and cultures in the face of climate change, land use change and globalization.


Link to UN PDF Download English:
Recommendations of the Permanent Forum
Posted by chantlaca at 8:18 AM