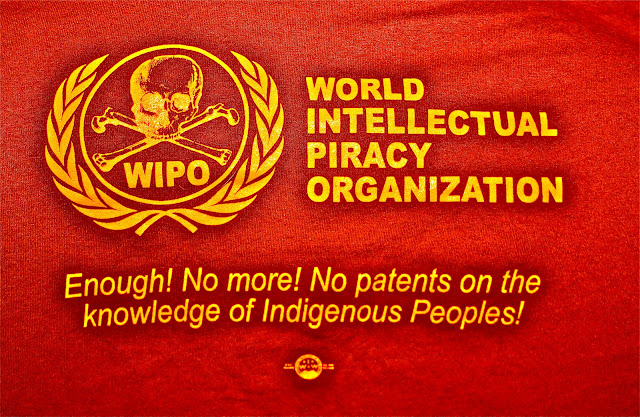 Statement on Comprehensive Dialogue with the World Intellectual Property Organization

Imagine living in a world where the ownership of your specific genetic resources and cultural heritage is stripped away from you without your consent, as a commodity bought and sold for
profit, accepted in a similar way to property rights for land theft.  The Doctrine of Discovery and Domination set a foundation of targeted destruction, and the current trend of international policies and regulations is to use dominant world views to colonize the remaining, "unexplored" aspects of the natural world.  Leading Indigenous representatives continue to combat the piracy of the World Intellectual Property Organization (WIPO) as they struggle to keep up with the fast-paced and costly negotiations of the international arena; whether we confront global issues of climate change-related disasters, the decline of peak oil production, water crisis, loss of biodiversity, or food security dilemmas that shape versions of development in the current state system, it is clear that empire, including the biocolonialism of WIPO, it undermines the survival needs of the world population and generations to come.

Indigenous Nations and Peoples, rights, upheld at the international level, make it necessary to support collectively held knowledge, land and resource rights and, at the same time, acknowledge that these rights are inherent and inalienable. The basis for the rights for Indigenous Nations and peoples is the right to self determination combined with the right to free, prior and informed consent, with the purpose of benefiting Mother Earth and creation. If the issue of biocolonialism is to be resolved, then systems that set agendas to deny essential human rights from Indigenous Nations and peoples, including WIPO, must be invalidated. 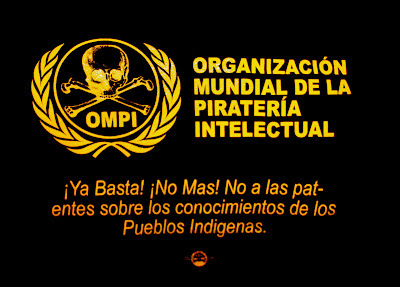 l. Delegates active in the World Intellectual Property Organization's (WIPO) Intergovernmental committee (lGC) on Genetic Resources, Traditional Knowledge and Folklore (GRTKF) provided an overview on the issues that have been occurring in the WIPO IGC meetings and processes that have undermined the rights and participation of Indigenous peoples, and are attempting to commodify and commercialize Indigenous knowledge, medicine, and other traditional practices.

3. Indigenous Peoples from across North America expressed their outrage at the current negotiations under the WIPO Intergovernmental Committee (lGC) on Intellectual Property and Genetic Resources, Traditional Knowledge and Folklore which fail to recognize Indigenous Rights, thereby forcing Indigenous Peoples to withdraw from the negotiations. They stressed that WIPO has no legitimacy and right to deal with issues related to traditional knowledge.

4. The NAIPC is concerned that there are a small number of Indigenous organizations, some state-funded, that appear willing to participate in the WIPO process.

5. The NAIPC recommends that WIPO be requested to use the proper term, 'Indigenous Peoples', since they are part of the UN inter-organ agency tasked with implementing the UNDRIP throughout the United Nations.

6. The NAIPC recommends that UNPFII make it make it clear to WIPO they do not have the support of Indigenous Peoples when they appear before the Permanent Forum through a clear, vocal and unanimous message.

8. NAIPC recommends that the United Nations make it clear to WIPO that they cannot regulate indigenous traditional knowledge and access to such and associated genetic resources, and that those remain under the control of Indigenous Peoples.

9. NAIPC recommends that UNPFII and the United Nations call for dismantling the WIPO IGC negotiations and to instead mandate negotiations under UNPFII or the CBD to develop international mechanisms to protect indigenous systems for regulating access to traditional knowledge and genetic resources and protecting such.

10. The NAIPC recommends that research on Free Trade be done, including World Trade Agreements.

I l. The NAIPC recommends that alternative funding mechanisms be established so that the NAIPC can have representatives at the WIPO meetings to observe and report back on the matters taking place in WIPO. 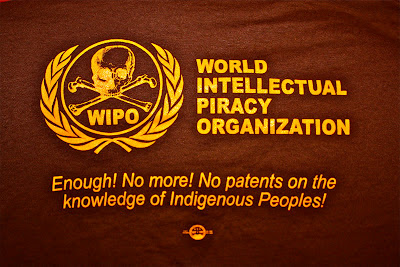 13. The NAIPC calls upon Indigenous Peoples to withdraw our active participation in the WIPO Processes on GRTKF until the States change the rules of procedure to permit our full and equal participation at all levels of the IGC and until the instruments recognize and are consistent with the existing international frameworks for the rights and interests of Indigenous Peoples and Nations within the scope of the IGC.

14. The NAIPC recommends that Indigenous Nations and Peoples set their own legal standards for the protection of our traditional knowledge, traditional cultural expressions, and genetic resources, and the UN must inform WIPO that it must respect Indigenous Peoples' laws on these issues. 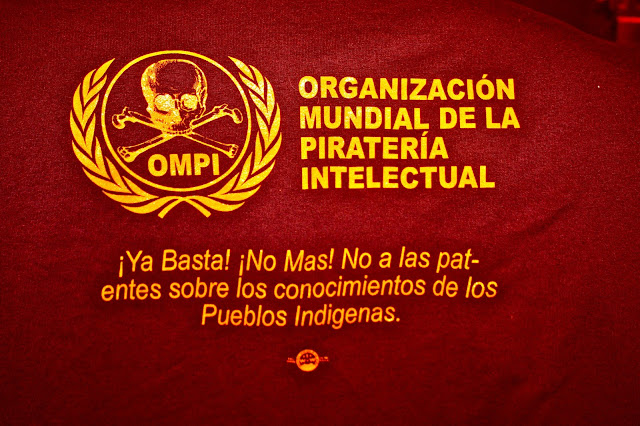