North American Caucus Statement on the Doctrine of Discovery 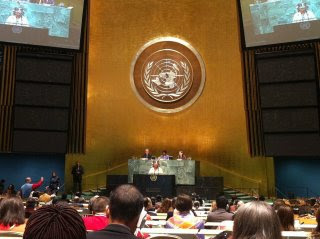 “The Doctrine of Christian Discovery is factually, illegally and morally wrong.”

“We call upon the United Nations to declare that the Doctrine of Discovery is illegal and cannot be relied upon by state governments and law making for policy development or in litigation.”
###

Agenda Item 3: Discussion on the special theme for the year: “The Doctrine of Discovery: its enduring impact on indigenous peoples and the right to redress for past conquests (Articles 28 and 37 of the UN Declaration on the Rights of Indigenous Peoples).”

Because this is the first time the North American Caucus has taken the floor, we want to commend Grand Chief Ed John for his election as Chairman of the 11th Session of the UN Permanent Forum.

The North American Caucus recommends the United Nations confirm that the doctrine of Christian discovery is factually, legally, and morally wrong. This is partly based on the fourth paragraph in the preamble of the UN Declaration on the Rights of Indigenous Peoples, which states “that all doctrines, policies and practices based on or advocating superiority of peoples or individuals on the basis of national origin or racial, religious, ethnic or cultural differences are racist, scientifically false, legally invalid, morally condemnable and socially unjust.”

The North American Caucus calls upon the United Nations to declare that the doctrine of discovery is illegal and cannot be relied upon by state governments in law making, policy development or in litigation.

The North American Caucus recommends that the Permanent Forum safeguard and promote Indigenous Peoples’ sovereignty in the European derived legal frameworks in its work on the Discovery doctrine.

The North American Caucus recommends the Permanent Forum should be encouraged in cooperation with state governments to undertake a complete and comprehensive study on the effects of the doctrine of discovery on the lands and territories of Indigenous Nations and Peoples,

The North American Caucus recommends that the UNPFII conduct a comprehensive study of the use of the Doctrine of Discovery by states as an underlying basis for state policies, practices, and laws, a study convened to discuss in detail the findings and global implications of the preliminary study of the Doctrine of Discovery and to present its findings to the Permanent Forum on Indigenous Issues at its annual session.

Mr. Chairman the North American Caucus recommends that Indigenous Peoples push forward to take this framework of analysis to the next level and encourage an expert group meeting to examine the effects of domination on Indigenous Peoples.

The North American Caucus recommends that a comprehensive panel of legalists and jurists be assembled to review all the actions under the doctrine of discovery and domination such as the residential schools and the Indian Act in Canada.

The North American Caucus recommends that the UNPFII urge States to repeal laws, policies and processes based on the Doctrine of Discovery.

We call upon the UNPFII to recommend that the appropriate UN body embark on an educational campaign on the Doctrine of Discovery.

Mr. Chairman, the U.S. Supreme Court ruling Johnson v. M’Intosh referred to the “extravagant…pretension of converting the discovery of an inhabited country into conquest,” thereby claiming on the basis of that pretension underlying title to Indigenous lands and territories. We absolutely reject the idea that Indigenous Nations and Peoples are conquered. For this reason, we recommend that the term ”conquest” not be used by the UNPFII in a manner that suggests or implies that conquest has in fact occurred and that Indigenous Nations and Peoples have been conquered.

Mr. Chairman, the original free and independent existence of each and every one of our nations and peoples, and our cultural and spiritual relationship with our territories, long predates any assertions or claims of a right of discovery and domination by the monarchies and nations of Western Christendom during the fifteenth and later centuries. Our original free existence is the source of the sacred birthright bequeathed to us by our ancestors, traced to the beginning of time.

Our sacred relationship with Mother Earth and the Sacred Laws of each of our nations and peoples is the basis for our declaration that we shall forever be rightfully free of any and all assertions or claims of dominance by states that trace their political heritage to a long succession of empires from Europe.

The following quote from the Inter Caetera papal bull of 1493 unequivocally expresses this structure of domination and subordination: “sub dominio actuali temporali aliquorum dominorum Christianorum constitute non sinct…” and refers to lands that had at no time been “under the actual temporal domination of any Christian dominator.”

Evidence of this connection in the Canadian context is found in the ruling The Delgamuukw v. British Columbia (also known as The Delgamuukw v. The Queen) (1997) 3 S.C.R. 1010, which is regarded as the leading decision of the Supreme Court of Canada where the Court made its most definitive statement on the nature of aboriginal title in the context of the “assertion of British sovereignty,” and “the assertion of Crown sovereignty.”

During the CERD Periodic Review 2012 the CERD asked the government of Canada “What is the legal foundation relied on by the state of Canada to justify their claim to the underlying title to the lands and territories of the Indigenous Nations?” Our research reveals that Canada’s assertion of sovereignty and Crown title is based upon the Doctrine of Christian Discovery and Domination which is implemented through a policy negotiation framework and the Comprehensive Claims and Self-Government policies, with the objective of extinguishing aboriginal rights.

The pretentious claims laid by states—such as the United Kingdom, Canada, and the United States—to our lands and territories are traced back to self-acknowledged pretentions to create rights of sovereignty in our traditional territories through symbolic and ritualized acts (see Arthur S. Keller, “Creation of Rights of Sovereignty Through Symbolic Acts 1400-1800,” 1939), which are sometimes falsely termed “past conquests.”

Mr. Chairman, the documents of domination that we have deeply examined in Latin and English—such as documents issued by the Holy See and the royal crown charters of England and Great Britain--contain an underlying structure of domination and subordination that exists to this day and results in current, persistent, and lethal effects of domination on our nations and peoples. The pope gave Christian monarchs that authorization “imperii Christiani propagationem..” so as “to propagate the Christian empire.” The English Crown followed this model by promulgating its own royal crown charters of discovery and domination relative to non-Christian lands.

Mr. Chairman, it was such language in many Church-State and State-Church documents that supposedly authorized monarchs of Christendom “to dominate” (‘deprimantur’ in Latin) non-Christian nations and peoples throughout the globe. Over more than five centuries this language system of domination and subordination has destructively impacted nations and peoples in Africa, Asia, Oceana and the Pacific Rim, South, Central, and South America, and Northern Europe, and particular in our region of Mother Earth, North America. It is this ongoing and dehumanizing tradition of domination and subordination that caused our nations and peoples to enter the international arena in 1977, which resulting in the UN Declaration on the Rights of Indigenous Peoples.