Dialogue on an optional protocol to the United Nations


Declaration on the Rights of Indigenous Peoples 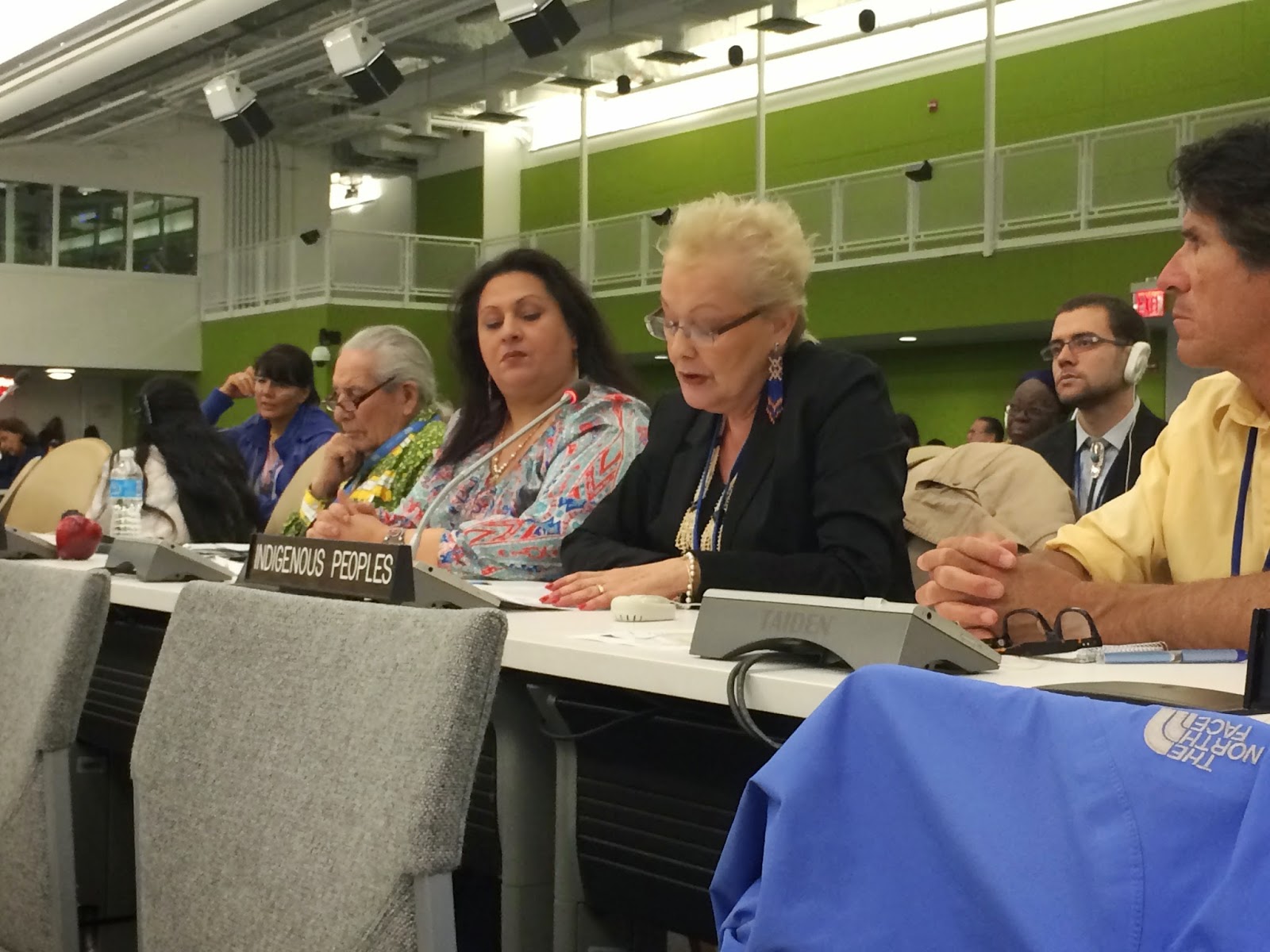 2.         We further recall the statement of Ms. Navi Pillay, former UN High Commissioner for Human Rights, speaking at the time in her official position, on the central importance of treaties on August 7, 2013: "Even when signed or otherwise agreed more than a century ago, many treaties remain the cornerstone for the protection of the identity, land and customs of indigenous peoples, determining the relationship they have with the State." The statement marked the International Day of the World's Indigenous Peoples on August 9, 2013.1

4.         The Haudenosaunee intervention on ‘Principles of Good Governance,’ delivered by Chief Oren Lyons (Onondaga Nation), under Agenda Item 3 at the Thirteenth Session of the UN Permanent Forum on Indigenous Issues (UNPFII) delivered on May 14, 2014 in paragraph 21, expressed the concern that a proposed optional protocol “may allow procedures for states to move disputes regarding lands, territories and resources from international processes to domestic judicial and political forums."3

5.         We take note that the upcoming Fourteenth Session of the UNPFII to take place April 20- May 1, 2015 at UN Headquarters lists as its proposed Agenda Item 5: Half-day discussion on the expert group meeting on the theme “Dialogue on an optional protocol to the United Nations Declaration on the Rights of Indigenous People”. We encourage this to be an open dialogue on the various proposals and drawbacks for an optional protocol, considering these proposals from all angles, and including the “full, equal, and effective participation” of Indigenous Peoples.

6.         A separate but related issue under consideration at this Expert Group Meeting is the proposal to revise EMRIP’s mandate, which emerged from the negotiations of the HLPM/WCIP Outcome Document. Paragraph 28 of the Outcome Document of the HLPM/WCIP states: “We invite the Human Rights Council, taking into account the views of indigenous peoples, to review the mandates of its existing mechanisms, in particular the Expert Mechanism on the Rights of Indigenous Peoples, during the sixty-ninth session of the General Assembly, with a view to modifying and improving the Expert Mechanism so that it can more effectively promote respect and the enforcement of the Declaration, including by better assisting Member States to monitor, evaluate and improve the achievement of the ends of the Declaration.”

7.         We note the HLPM/WCIP process arose between the annual sessions of the UNPFII. As a result, the proposed revision of EMRIP has not had the benefit of the full, equal, and effective participation by Indigenous Peoples. We are concerned that an essential Indigenous mechanism within the UN system is being revised without the full participation of Indigenous Peoples. We are concerned that a lack of full, equal, and effective participation is the new norm within the UN system.

9.         We acknowledge and appreciate all the papers submitted to this Expert Group Meeting by each expert and we have carefully reviewed each paper. We share the view as was laid out in the initial “Study on an optional protocol” and in some of the subsequent expert papers submitted for this Expert Group Meeting, that an implementation gap exists for the UNDRIP. We also share the view that there is a lack of adequate knowledge and understanding of the UNDRIP. Part of AILA’s work since the adoption of the UNDRIP in 2007 has been to continually educate on its content and advocate for its implementation on local, continental and global levels.

10.       We continue to be concerned about the desire for UN Member States to ‘domesticate’ our rights, rather than maintain relations with Indigenous Nations and Peoples in the international arena, on a nation-to-nation basis, which was the original purpose of Indigenous Nations and Peoples in coming to the UN. It should be duly noted that international law supersedes domestic law. We are concerned about moving disputes regarding our rights to our lands, territories and resources to an optional protocol, which would rely on governments to do the right thing and ratify this optional protocol.

11.       We find a few proposals, presented in the expert paper submitted by Professor Mattias Åhrén to the Expert Group Meeting, relating to a possible new role for EMRIP to be particularly troubling.

12.       The suggestion that only Indigenous Peoples recognized by states would be eligible to submit complaints to a new optional protocol body, is in direct violation of the UNDRIP, our right to full, effective and equal participation, and violates the right to self-determination. This is non-negotiable. We have been fighting against the perception that states decide who is or is not Indigenous for hundreds of years.

13.       A six month time limitation to raise human rights issues in international fora after exhausting domestic options is damaging and overly burdensome for our Peoples. We are unclear who determines what rights could be deemed principally important.

15.       This proposed new role for EMRIP could lead to a claim of a ‘duplication of work within the UN system.’ We were happy to see that the original “Study on an optional protocol” stressed that “a voluntary mechanism cannot serve as a way for States to avoid being monitored by existing international or regional human rights bodies and mechanisms” (paragraph 40).

16.       The work of the UNPFII is of paramount importance within the UN system. The American Indian Law Alliance, and the Nations and communities we serve, have always supported and continue to support the work of the UN Permanent Forum on Indigenous Issues. Our Founder and President, Tonya Gonnella Frichner, Esq. (Onondaga Nation), served as the North American Regional Representative to the UNPFII for a three year term from 2008-2011, brought forward by Indigenous Peoples. As a result of that role, she has direct experience and participated first-hand in the indispensable work of the Forum.

17.       Indigenous Peoples have a voice and we must be recognized as our own experts in any forum concerning us.

1.         We cannot allow procedures that will allow for states to move disputes regarding our rights to our lands, territories and resources from international processes to domestic judicial and political forums.

2.         In line with established international law, the UNDRIP, the UN Charter, and all other applicable international law must be the framework for the realization of the self-determination of Indigenous Peoples, including Article 37 of the UNDRIP:


2.         Nothing in this Declaration may be interpreted as diminishing or eliminating the rights of indigenous peoples contained in treaties, agreements and other constructive arrangements.


3.         All deliberations concerning a proposed optional protocol for the UNDRIP, including any proposed overhaul of the mandate of EMRIP must include the full, effective, equal participation of all Indigenous Peoples in line with the UNDRIP.