Memorandum to the US Department of Justice 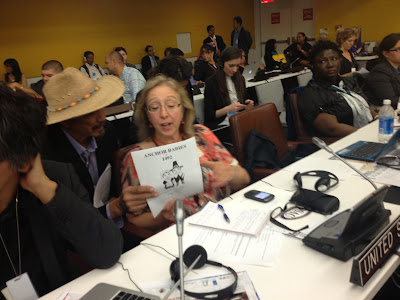 May 10, 2012: Presentation of Memorandum to the US Justice Department to Ms. Laurie Shestack Phipps, Team Leader - United States Mission to the United Nations during the proceedings of the 11th Session of the UN Permanent Forum on Indigenous Issues UN Headquarters, New York NY

The long march in defense of civil rights for All Peoples which began with the dismantling of discriminatory racial profiling practices that benefit the European American "white" constituencies with ethnic preferences in electoral, educational, economic, and legal systems has many chapters, but it begins with the basic recognition of universal Human Dignity and compassion.

Governor George Wallace of Alabama and Sheriff Clark of Selma also opposed the tides of justice,  and in the name of the "Rule of Law" committed acts of atrocity and brutality that have left lasting wounds on the visage of the the concept of America as "Land of the Free".

Therefore, in light of the fact that the issues of racial profiling and discriminatory policing that have begun to be addressed in the US Justice Department Letter of Findings regarding the Maricopa County Sheriff's office and the Melendres vs. Arpaio decision by the US Court of Justice HAVE NOT mentioned the systematic practices of racial profiling against Indigenous Peoples in particular as fundamental to the overall violations of Civil Rights, Human Rights, and Indigenous Rights within the scope of law enforcement operations in Maricopa County: 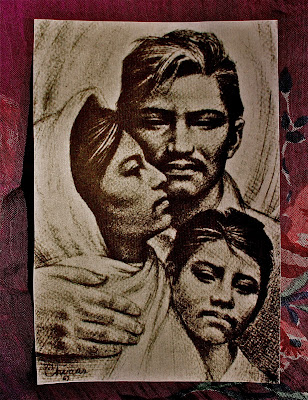 La Familia
Charcoal and Pencil portrait by Joaquín Chiñas
"Stopping Mexicans to make sure they are legal is not racist.  If you have dark skin, you have dark skin! Unfortunately, that is the look of the Mexican illegal."
Files of Maricopa County Sheriff J. Arpaio,
quoted on page 28 of US District Court Case 2:07-cv-02513-GMS
Document 494 12/23/11

Posted by chantlaca at 2:24 PM