Agenda Item: 3c) Youth, Self-Harm and Suicide
IMPUNITY and STATE SANCTIONED VIOLENCE
522 years of Colonialism and Genocide against the Original Nations of Anahuac [Mexico] as a Major Driver in the International and Global Context of Indigenous Youth Violence 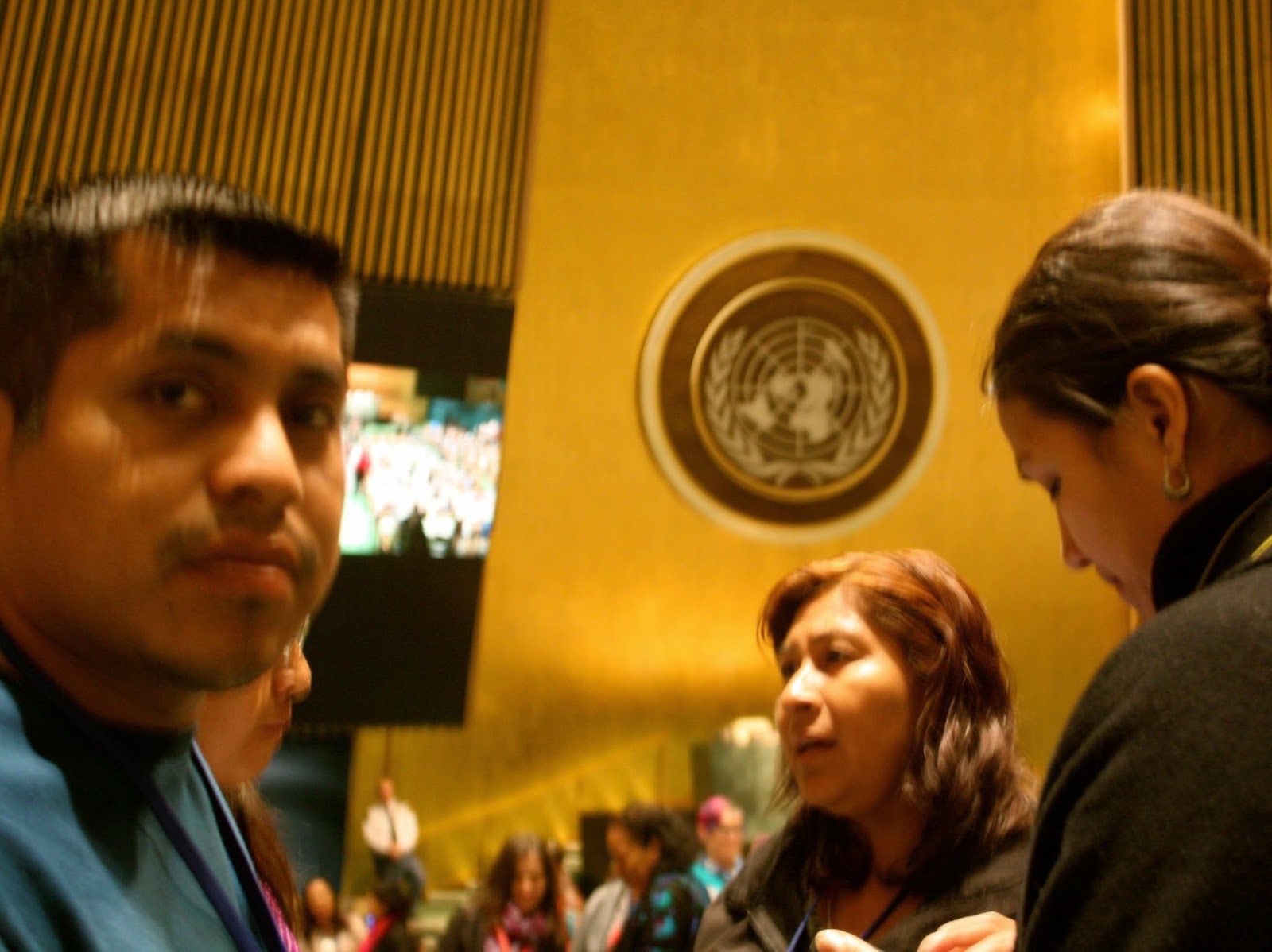 Thank you Madam Chair. Good morning to the members of the Permanent Forum, to the delegates and all the brothers who speak native languages.  We thank TONATIERRA for their solidarity with our pain for what happened to the young students of the Ayotzinapa teacher school "Raúl Isidro Burgos", and for accompanying us in the process of presenting our intervention in this space.

I am Cruz Bautista Salvador, I am a bilingual teacher of Nahuatl and Spanish, and the uncle of Benjamin Ascencio Bautista, one of the missing students, and I am here to call your attention to what happened on Sepetembre 26 and 27 of 2014, to the students in Ayotzinapa, Iguala, Guerrero, Mexico.  The students were on a routine activity they perform often, when they were attacked by state security forces, which ended with the death of 3 students, 2 seriously injured and 43 missing students.

What happened to these students is of concern in terms of human rights of Indigenous Peoples in Mexico, and in terms of violence experienced by Indigenous youth in Mexico, since most of the 43 missing students are Indigenous, bilingual students who speak a native language. After 522 years of resistance, the Mexican government continues to criminalize, discriminate and disappear Indigenous youth because of their origins. 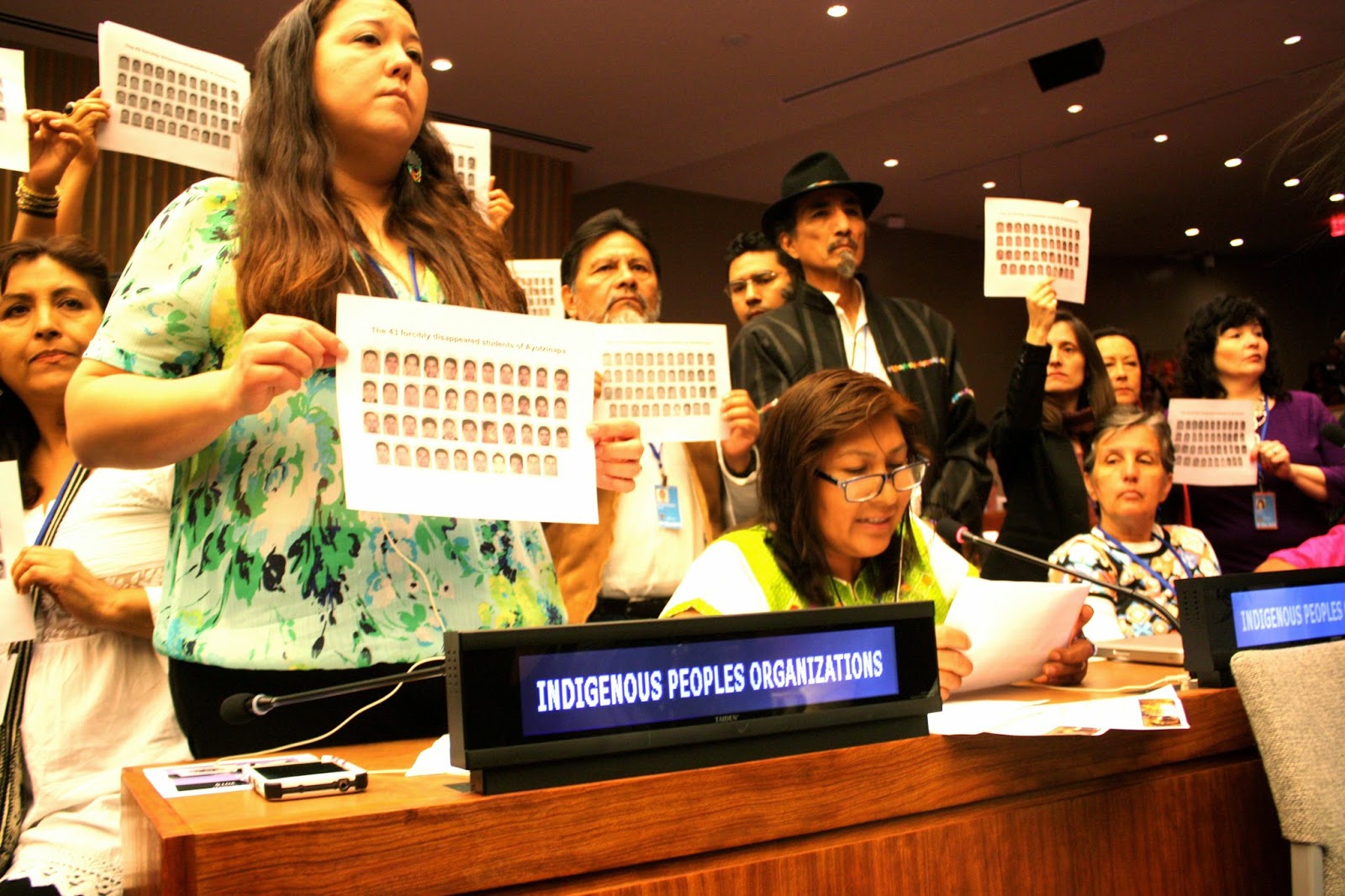 I am María de Jesús Tlatempa Bello, mother of José Eduardo Bartolo Tlatempa, one of the missing students, and I come here to testify, representing the 43 families, who are Indigenous persons, peasants and humble people from several communities.  We teach our children to work while studying. It was a privilege that our kids could go to study to the teacher school of Ayotzinapa, since many of our children are uneducated. And when left without studying, our children migrate to other countries in search of a better life and other opportunities.  In our communities, it is a pride to be a normal school student, and our children were able to implement their right to education, and by disappearing them, their right to a fulfilled life was violated.

We are concerned about the lack of guaranties in terms of security, education and health in Mexico, especially for Indigenous youth, despite international treaties guaranteeing the human rights of Indigenous Peoples. 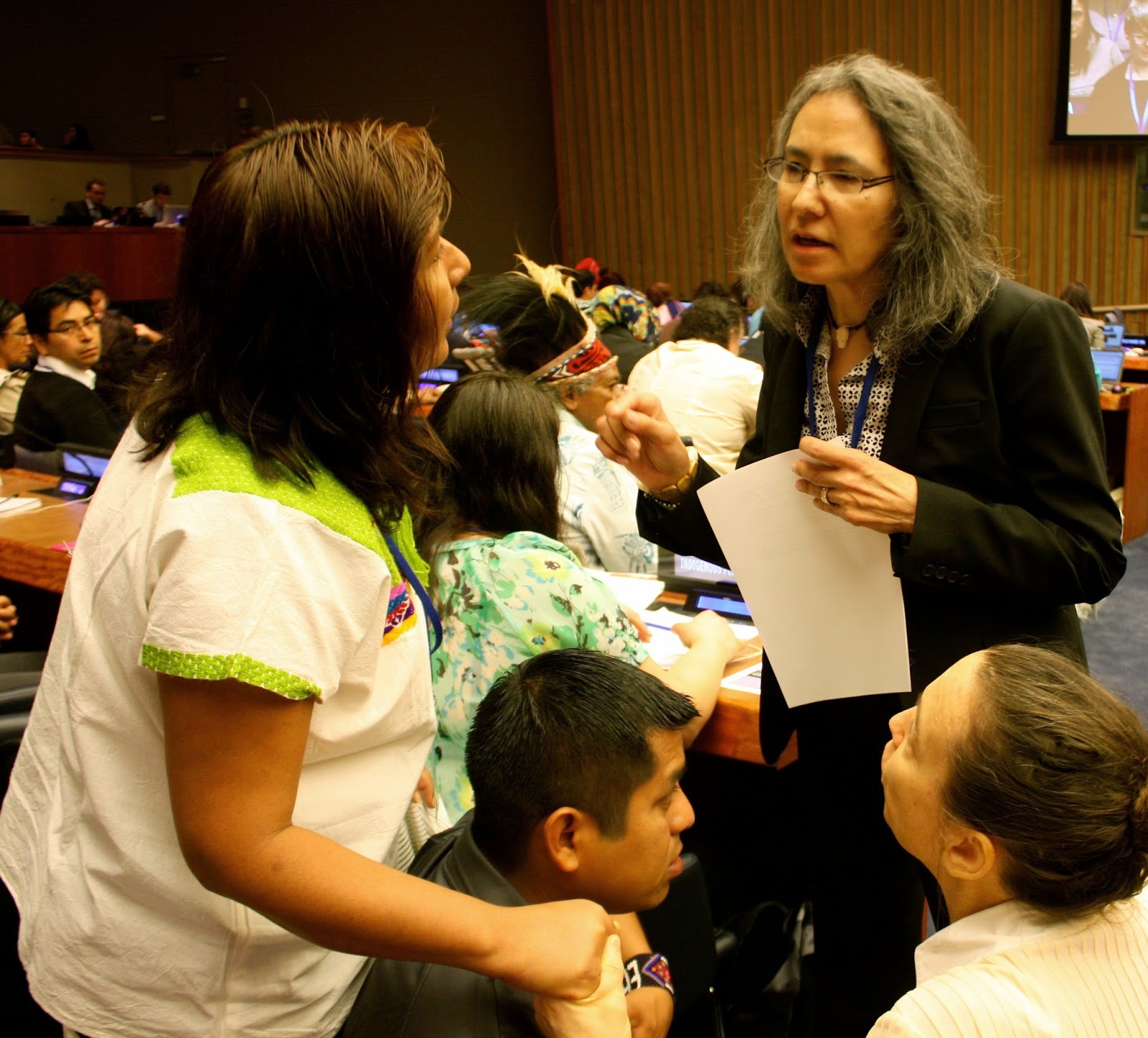 Therefore, we call for the Permanent Forum to recommend to the UN Economic and Social Council and the Government of Mexico in particular:

1.     Presenting of our 43 Ayotzinapa students alive.
2.     That the Mexican State resume and expand the investigation regarding the events surrounding the disappearance of our 43 Ayotiznapa students on September 26 and 27, 2014, in Iguala, Guerrero, Mexico.
3.     That the Mexican government clarify the events of September 26 and 27 in Iguala, Guerrero Mexico, and punish those responsible for all criminal acts committed. 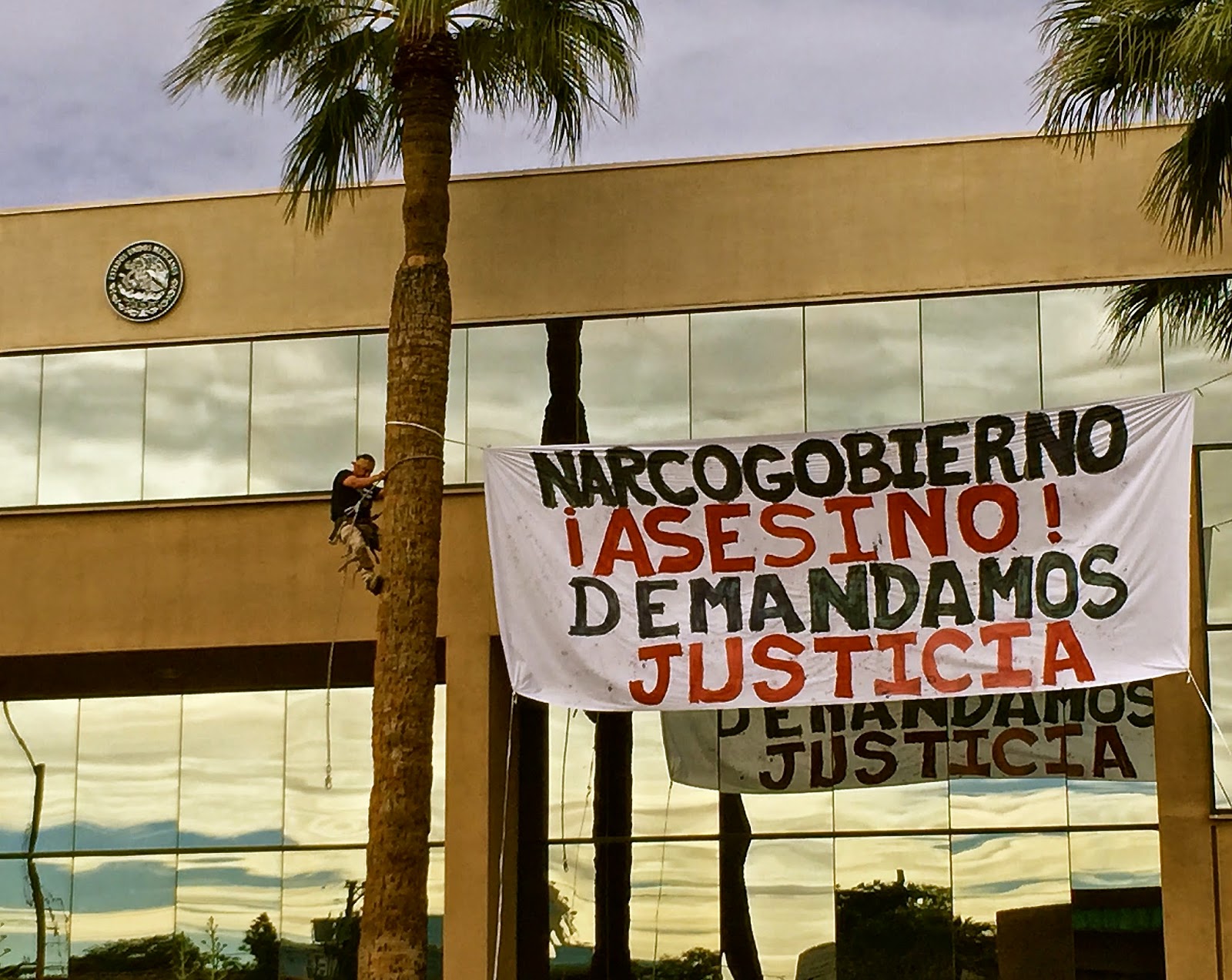 Also, we call upon the Permanent Forum would recommend a study by the Special Rapporteur on the Rights of Indigenous Peoples about the following issues in Mexico:

1.     Forced disappearances.
2.     Unlawful imprisonment.
3.     Lack of legislation and sanctions for regimes of systematic torture.
4.     Respect for basic human rights and the rights of  Indigenous youth.

We appreciate the time you have given us here and we hope that the Permanent Forum and other UN mechanisms shall follow up on this issue in order to ensure the implementation of the rights of Indigenous Peoples, and especially for Indigenous youth and students in the state of Mexico. 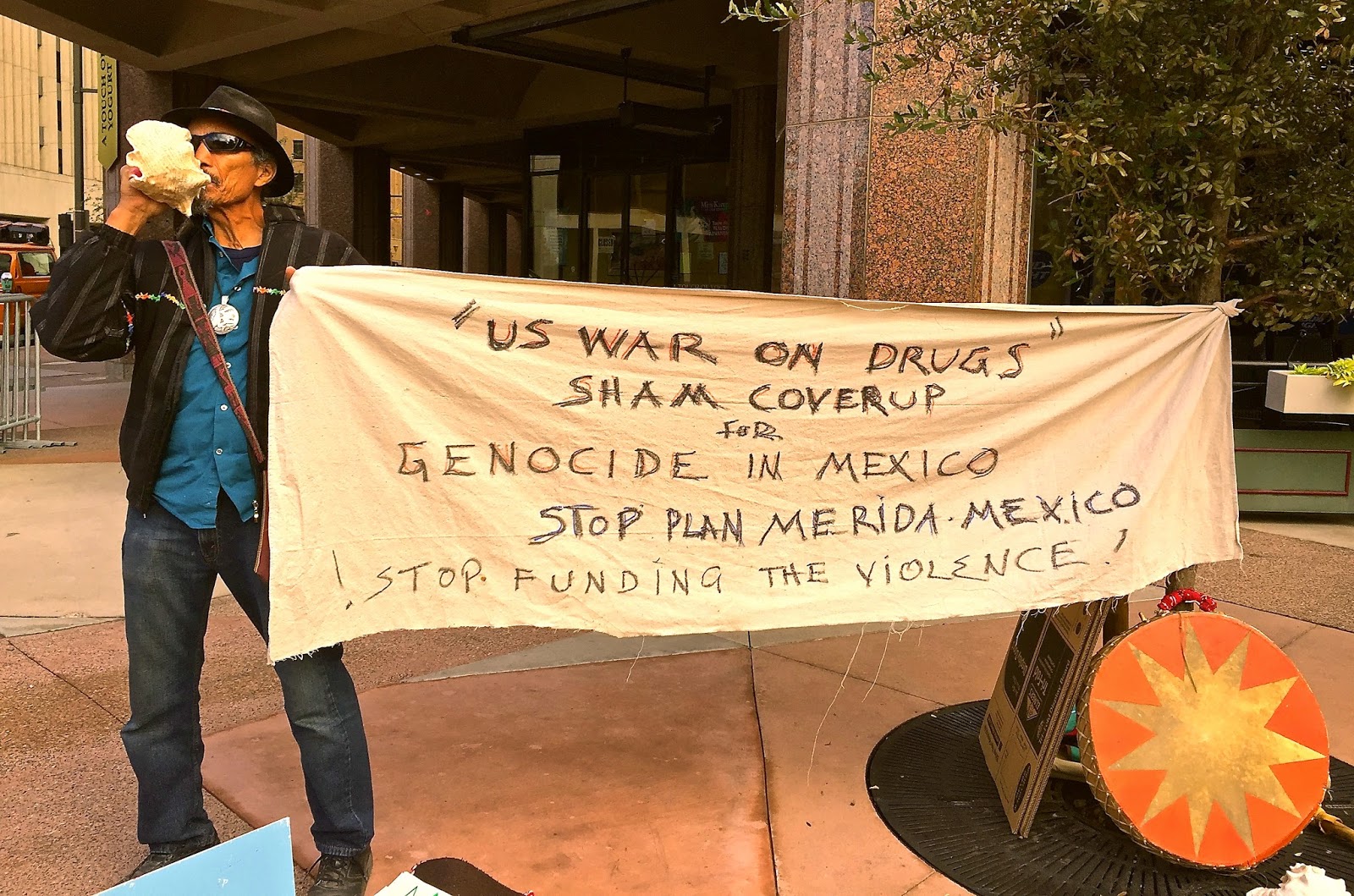 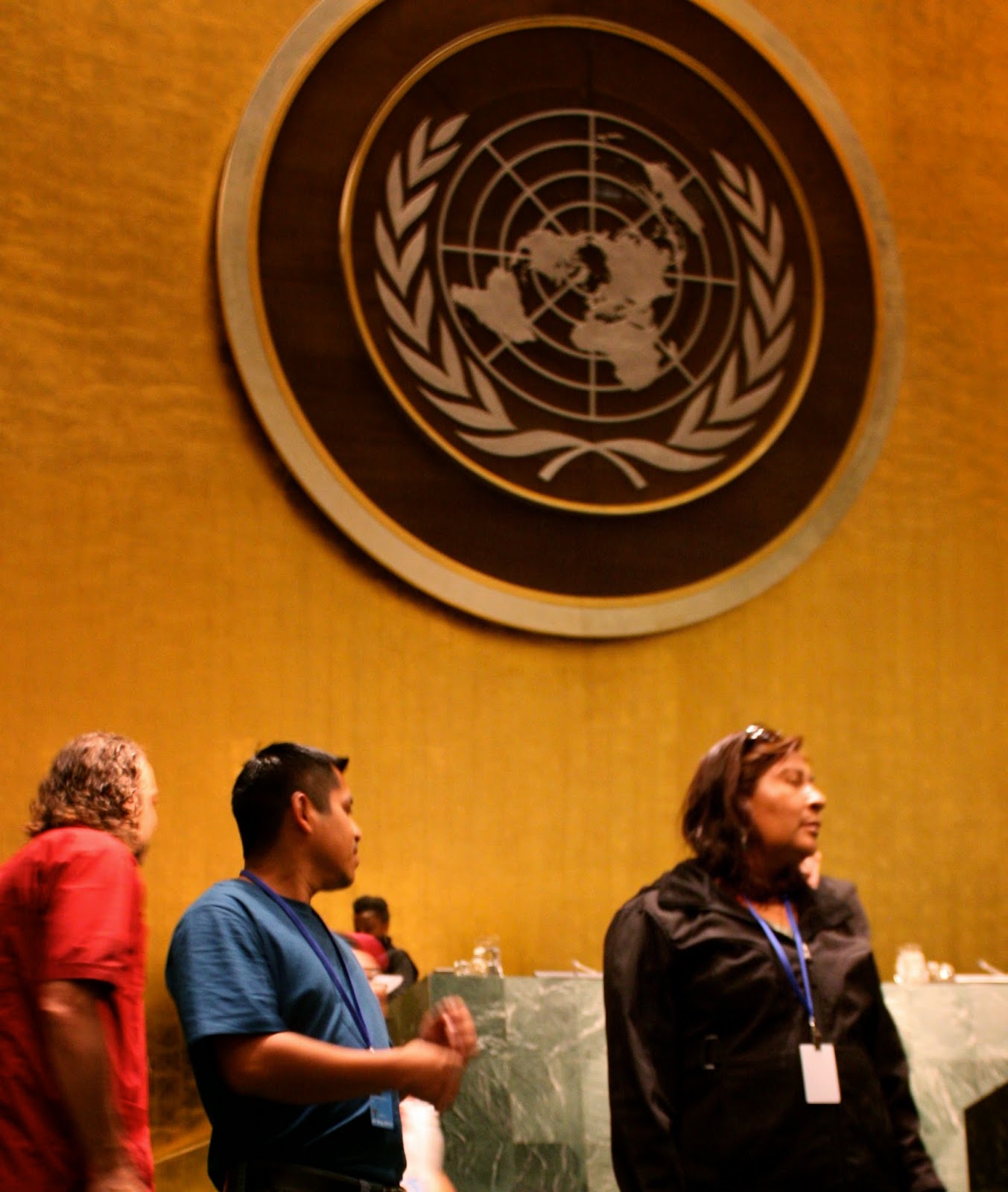 Collusion and Complicity of US Government with Narco Violence in Mexico

AYOTZINAPA: Petition of Concern to the UN Special Rapporteur on Indigenous Peoples 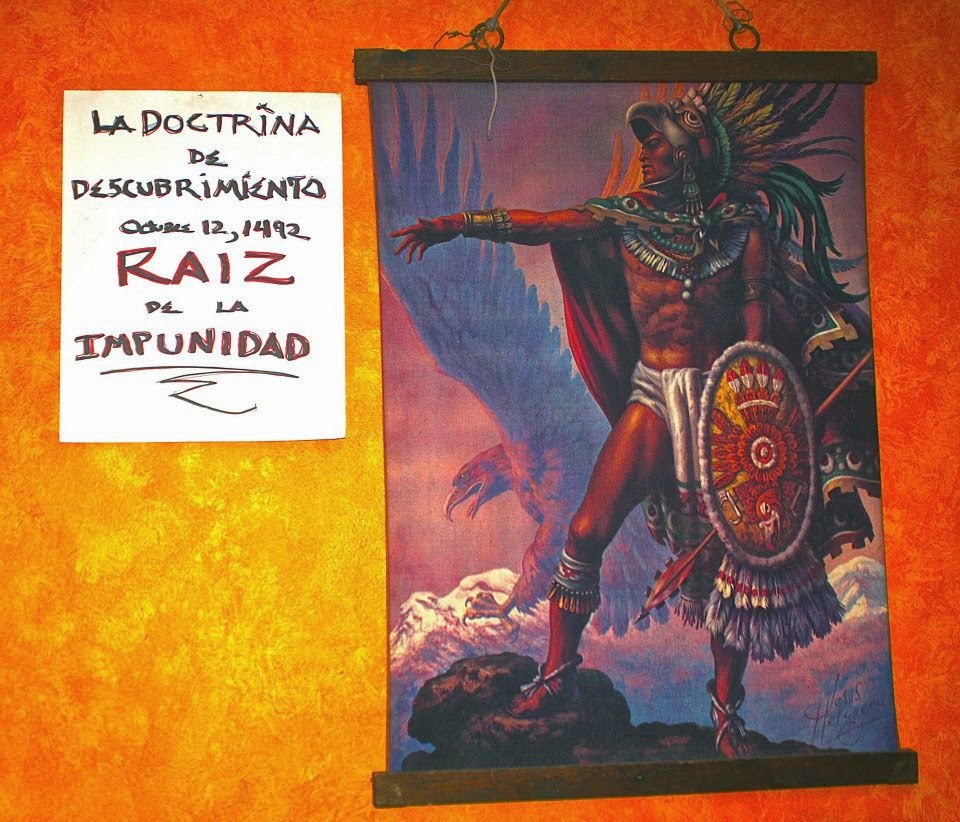 Posted by chantlaca at 8:16 AM