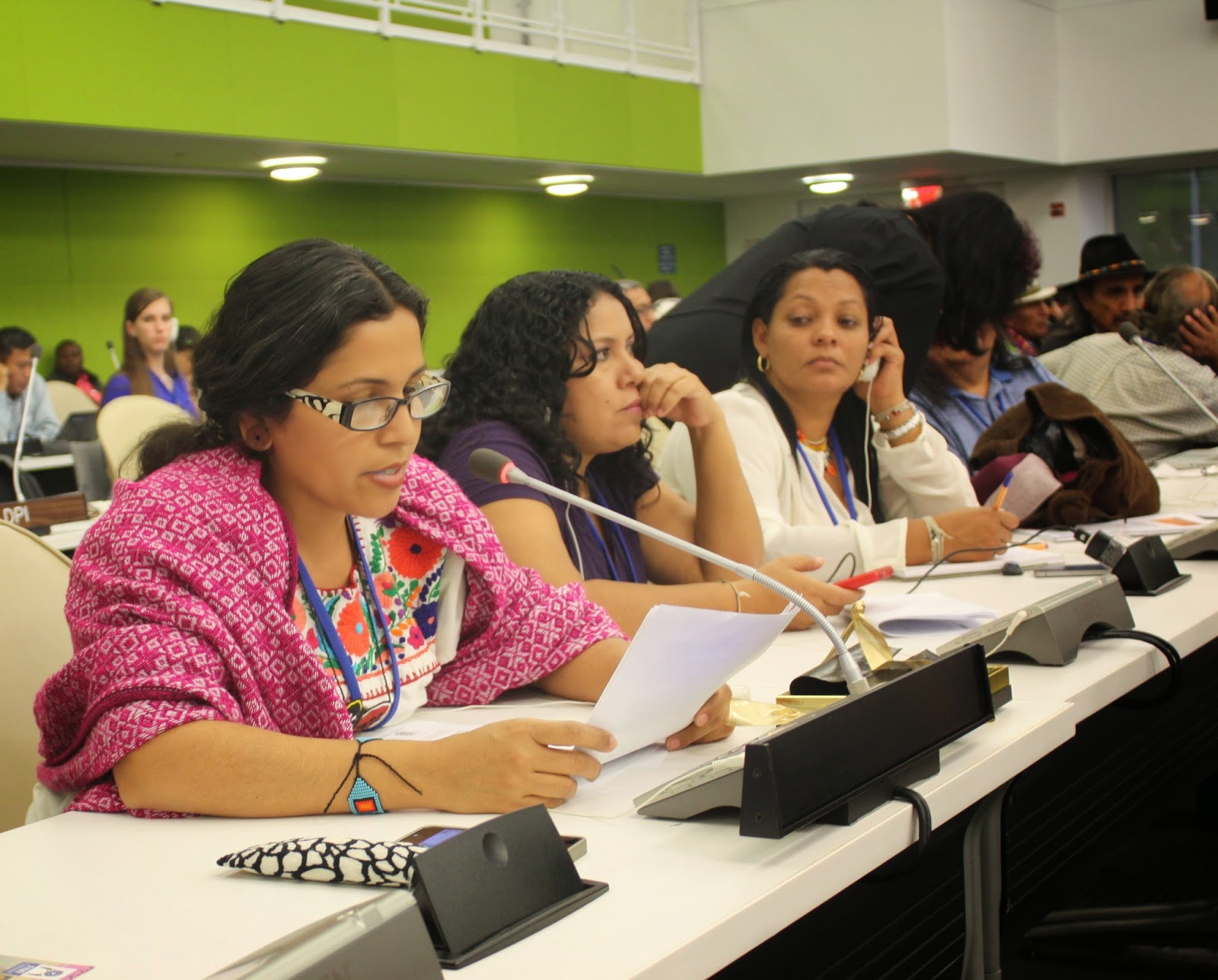 Madame Chair, Members of the Permanent Forum, Sisters and Brothers,

We, the Global Indigenous Women's Caucus, highlight and reaffirm the rights of Indigenous Women and Peoples of self-determination and recognize the traditional principles of good governance exemplified by Indigenous Peoples since time immemorial.

We acknowledge that Article 46 in the United Nations Declaration on the Rights of Indigenous Peoples (“Declaration”) emphasizes territorial integrity, recognizing that the territorial integrity of Indigenous Peoples should also be highlighted and reminding States of the equality of Indigenous Peoples and the principle of non-discrimination when examining the application of the right to self-determination in the context of the principle of territorial integrity. The right to self-determination for peoples is not separated from Article 46. We also remind States that the preambular language of the Declaration states that “nothing in this Declaration may be used to deny any peoples their right to self-determination, exercised in conformity with international law.” Article 46 must be interpreted within the overall context of the Declaration. No Article shall be interpreted in such a way as to contravene the overall purposes of the Declaration or undermine the function of any other Article. Thus, Article 46 shall not be read as an obstacle to ongoing efforts to achieve the goals set forth in other Articles and in the Declaration as a whole.

Recognizing the call for redress as stated in the Study on the impacts of the Doctrine of Discovery on Indigenous Peoples including mechanisms, processes, and instruments of redress by Grand Chief Ed John, we acknowledge that redress may only occur after an admission of culpability by the responsible parties.

We recall the recommendations made in paragraphs 4 to 11 of the Permanent Forum’s tenth session report (E/2011/43-E/C.19/2011/14 and Corr.1) recommending that States, human rights bodies and judiciaries denounce the “doctrine of discovery” and discontinue its use and application.

Emphasizing the call of The Permanent Forum from the 11th Session for States to repudiate racist doctrines such as the doctrine of discovery, or other doctrines, policies and practices based on or advocating superiority of peoples or individuals on the basis of national origin or racial, religious, ethnic or cultural differences.

Affirm that “State Governments must be constrained from the illegal taking of Indigenous lands, territories and resources justified by these doctrines” as stated in Grand Chief Ed Johns Study on the impacts of the Doctrine of Discovery on Indigenous Peoples.

We reaffirm recommendations in the Report of the International Expert Group Meeting on the theme “Sexual Health and Reproductive Rights: articles 21, 22, 23 and 24 of the United Nations Declaration on the Rights of Indigenous Peoples” (E/C.19/2014/8) including recommendations 62, 63, and 64 which state:

62.       Considering their impact on the sexual and reproductive health and rights of indigenous peoples, we call for a legal review of United Nations chemical conventions, in particular the Rotterdam Convention, to ensure that they are in conformity with international human rights standards, including the United Nations Declaration on the Rights of Indigenous Peoples and the Convention on the Rights of Persons with Disabilities.

63.       States must halt the export and import of banned and unregistered pesticides from countries that prohibit their use in their own country as a case of environmental racism and environmental violence with proven and devastating impacts on reproductive and sexual health, in particular maternal and child health.

64.       Relevant United Nations entities should conduct a study, in partnership with indigenous peoples’ organizations, that documents the linkage between environmental violence, including the operations of extractive industries, chemical pollution and the destruction of the indigenous habitat, and the sexual and reproductive health of indigenous peoples, as well as issues pertaining to sexual exploitation, trafficking of indigenous girls and sexual violence, with concrete recommendations on protection measures.


Good Governance and Self Determination.

We call upon the United Nations Permanent Forum to set the special theme for the right to Water (and the right of Water) for the 2016 session of the United Nations Permanent Forum or in the alternative 2018, that specifically initiates a close review and assessment of states' water allocation, contamination, use, regulation, and access policies that affect the rights of Indigenous Peoples and Nations, the health of our communities and ecosystems, and that of our future generations as water is crucial for biocultural diversity and for sustaining all aspects of Indigenous Peoples' full expression of our self-determination and essential for our physical, cultural and spiritual well-being.

Thank you Madam Chair for your full consideration of these recommendations.

Posted by chantlaca at 3:09 PM