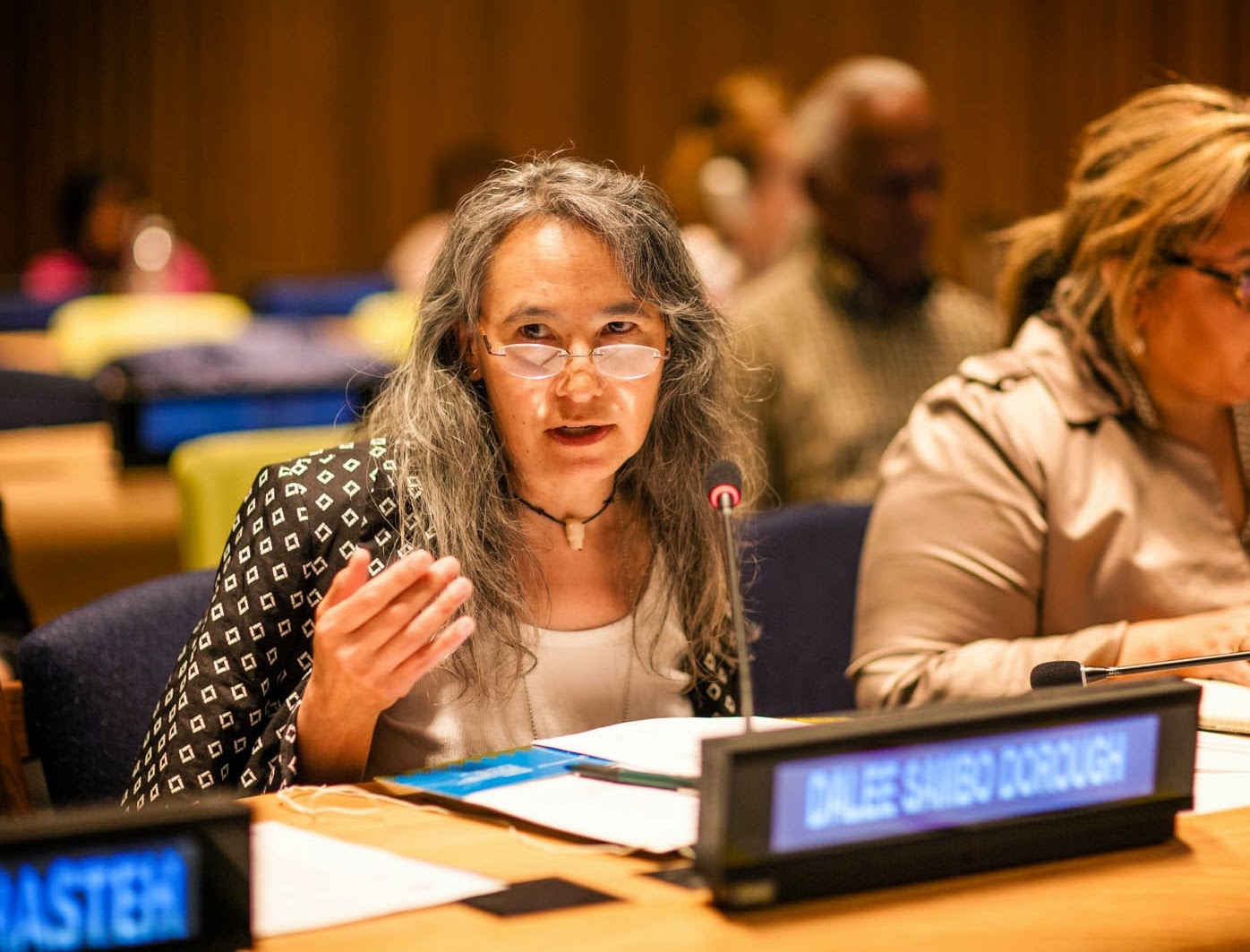 I am writing this holiday message after a very full and dynamic year. Though each Expert Member of the Forum has done extraordinary work within their own home communities and at the national or domestic level, much has also happened over the past 12 months at the international level.

The most significant event of 2014 was the High Level Plenary Meeting of the UN General Assembly known as the World Conference on Indigenous Peoples. After four years of planning, the September 2014 gathering at United Nations headquarters in New York attracted thousands of Indigenous peoples' representatives and supporters, who took part in two days of deliberations alongside leaders and delegates from UN Member States.

Following an inspirational opening ceremony, the Outcome Document, Resolution A/Res/69/2, was passed by acclamation. This UN General Assembly resolution reflects a wide array of solemn commitments by all UN member states.  The significant  reaffirmation of the purposes and principles of the UN Charter as well as their reaffirmation of support for the UN Declaration on the Rights of Indigenous Peoples, as formal commitments, are crucial to the future of Indigenous peoples, nations and communities.

In addition, the UN member state commitments “to achieve the ends of the UN Declaration on the Rights of Indigenous Peoples” through specific action, in consultation and cooperation with Indigenous peoples, “to develop and implement national action plans, strategies or other measures” are highly significant. Indigenous peoples are acutely aware of the “implementation gap” and these UN member state commitments to undertake concrete action at the national and domestic level are crucial to closing this gap. And, the post-2015 development agenda, Indigenous elders, women’s rights, health, the rights of persons with disabilities, and inclusion of youth and children are all clearly important areas of concern for Indigenous peoples and were fortunately addressed by the Outcome Document.

Though this achievement should be celebrated by all, I have observed an inconsistency between member state policy at the international level and their actions and policy at the national or domestic level. Fortunately, the Permanent Forum and Indigenous peoples generally enjoy support from UN member states at the international level. However, too often, little support or prioritization to implement Indigenous human rights norms at the national and domestic level is shown. And, in some extreme cases, we have member state support in key areas internationally, while at home, in these same states, Indigenous peoples are being forcibly removed from their lands and their very survival and security threatened both individually and collectively.

As Chairperson of the UN Permanent Forum on Indigenous Issues, I have felt the enormous challenges facing Indigenous peoples. There is no time or room for complacency. Collectively, we must work even harder to make a difference on the ground for Indigenous peoples. These priorities and the corresponding UN member state commitments affirmed by the Outcome Document are now more urgent than ever and the solemnity with which these commitments were made must prompt immediate action at the domestic and national level. We need to see the real “outcomes” of the Outcome Document – we need to see the action- oriented work that UN member states iterated and reiterated in the drafting process of this General Assembly resolution.

I make this call to action because every Indigenous person that I have met in every community and every meeting that I’ve been engaged in over the past year, I have only heard of the enormous and horrific problems that they face, ranging from assassinations and killings to displacement and eviction from their lands, territories and resources to criminalization for attempts to defend their basic human rights to lack of access to education, health and other social services to extreme poverty and food insecurity to soaring suicide rates and continuing discrimination and marginalization to the loss of Indigenous languages.

The Outcome Document and the UN Declaration on the Rights of Indigenous Peoples are the framework for the genuine implementation of our rights at the national and domestic level and more important, in the actual homelands of Indigenous peoples. The work  before us and in particular for UN member states, must be done at home, in member state capitols and within Indigenous homelands – not in the halls of the UN in New York, Geneva, Nairobi or elsewhere. I want UN member states to breathe life into the strong and solemn commitments that they made in the Outcome Document. I do not want member states to feel that the World Conference was the end of an international process -- it is only the beginning of sorely needed domestic processes and dialogue. And, such processes and dialogue with Indigenous peoples domestically are URGENT.

In addition to this message and call to action, I want to share a few words about the Thirteenth Session of the Forum in May 2014 and my engagements as the Chairperson of the Permanent Forum in recent months.

The two-week session was attended by over 1200 participants, with a large number of representatives of Member States, including high-level officials, UN agencies, funds and programmes, Indigenous peoples’ delegates and NGOs. There were also a significant number of indigenous women and youth, and Indigenous persons with disabilities.

The theme of “principles of good governance consistent with the UN Declaration on the Rights of Indigenous People” gave voice to Indigenous legal traditions that emulate and represent good governance. There were also examples of member state and Indigenous cooperation to develop governance structures that improve conditions within indigenous communities and where indigenous peoples’ direct involvement in every stage of project design were highlighted. Such instances helped to emphasize the importance of Indigenous participation in decision-making and the design of meaningful and effective governance approaches.

My interest in the use of this theme was to highlight the relevant of transparency; responsiveness; consensus oriented; equity and inclusiveness; effectiveness and efficiency; accountability; participation; consultation and consent; human rights; and the rule of law in order to influence both the high level plenary meeting and the ongoing dialogue concerning the Sustainable Development Goals. For Indigenous peoples, far too often, the principles of good governance, which are interlinked and mutually reinforcing, are rarely practiced by  UN member states. Again, my desire was to emphasize these important dynamics necessary for advancing Indigenous peoples’ human rights at the national and domestic level, where good governance should be practiced as a norm and not merely an ideal.

Under the agenda item of Human Rights, the Permanent Forum congratulated Professor James Anaya on the successful conclusion of his service as Special Rapporteur on the rights of indigenous peoples. We also welcomed the appointment of Ms. Victoria Tauli- Corpuz as the new Special Rapporteur and we look forward to working closely with her. We had the honor of the presence and words of Mr. Wilton Littlechild on behalf of the Expert Mechanism on the Rights of Indigenous Peoples; Francisco Cali, President of the Committee on the Elimination of Racial Discrimination; Ms. Soyata Maiga, on behalf of the African Commission on Human and Peoples’ Rights; Mr. Emilio Alvarez, Executive Secretary of the Inter-American Commission on Human Rights; and Mr. Kenneth Deer on behalf of the Voluntary Fund for Indigenous Peoples. It was important for the Permanent  Forum to publicly congratulate Mr. Cali and acknowledge his appointment as the  first Indigenous expert to be appointed as President of a United Nations treaty body.

Our half-day discussion on Asia yielded a range of recommendations to Asian States as well as to the United Nations system and Indigenous peoples’ organizations from the region. The Forum has expressed concern that most of those recommendations are yet to be implemented. At the same time, some positive developments concerning Asian Indigenous peoples must be noted. In particular, the legal recognition of the Ainu as the indigenous people of Japan; the decision of the Constitutional Court of Indonesia in recognizing the customary rights of Indigenous peoples with regard to forests; and the increased engagement and partnerships of national human rights institutions and agencies of the United Nations system with indigenous organizations and institutions were all notable outcomes of this half day focus.

However, the Permanent Forum and its members remain concerned about the increasing adverse impacts of climate change, the large hydroelectric dams, nuclear power plants, biofuel plantations, windmills and geothermal plants, which are all adversely impacting Asian Indigenous peoples’ territories and being pursued without the free, prior and informed consent or the full and effective participation of Indigenous peoples.

For 2015, among many other objectives, we are preparing for our Fourteenth Session [April 20 - May 1]; a forthcoming Expert Group Meeting on a voluntary optional protocol to the UN Declaration [January 27-29]; an inter-sessional meeting in Salekhard, Russia to focus upon reform of our methods of work to strengthen the role of the Permanent Forum within the UN system [February 25-28]; and ensuring that the human rights and concerns of Indigenous peoples are explicitly reflected in the 2015 sustainable development goals.

In conclusion, I want to stress the importance of the UN Declaration on the Rights of Indigenous Peoples to this future work. As an international human rights instrument, the UN Declaration forms the framework for all of the Permanent Forum’s work – it firmly guides our activities and our objectives within the UN system and beyond. As noted, we cannot afford to divert from our continued effort to address the implementation gap in regard to all of the inter-related, inter-dependent, indivisible and inter-connected provisions of this pivotal human rights instrument. Through the UN Declaration and our collective work, we must ensure that there is a real difference being made on the ground for Indigenous peoples.

I wish each of you the best for 2015.  Thank you for your support over the past   year.
May our ancestors guide us well into the coming New Year.