Mapuche Nation to Evo Morales:
“The United Nations is denying the direct, effective and equal participation of the Indigenous Peoples in the proceedings leading up to the UN High Level Plenary Meeting of September 2014.” 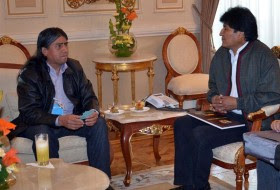 A delegation of the Mapuche Nation of Chile on Wednesday (June 18, 2014) called upon President Evo Morales of Bolivia to carry a message on behalf of the Indigenous Peoples of the world to the High Level Plenary Meeting (HLPM) of the UN General Assembly, (aka World Conference on Indigenous Peoples) to be held on 22 and 23 September in New York at UN headquarters.

The Mapuche delegation was led by Aucan Huilcaman, head of the International Relations of the Mapuche Council of All Lands, who met with President Morales for that purpose at the Government Palace.

"We want president Evo Morales carry the message of all indigenous peoples of the world, by directly addressing the fact that the United Nations has applied its rules of procedure as a system of states in the organizing of the HLPM, restricting the participation of indigenous peoples and preventing a direct and effective dialogue with equality as peoples, equal to all other peoples."said Aucan.

The Mapuche Nation representative also anticipated that along with the message to the UN,  the Mapuche also seek to open a dialogue with the Union of South American Nations (UNASUR), which is an organ of state governments which includes constituencies of indigenous peoples.

"Among the constituencies of the governments that make up UNASUR there is a majority of indigenous peoples therefore we need to establish dialogue between the states and Indigenous Peoples operating under the framework of UNASUR," he said.

Aucan Huilcaman explained that the Bolivian President informed the Mapuche delegation that his government has prepared some formulas to respond to that particular situation, which, in his opinion, is a reality of which he himself is evidence as president of Bolivia. On separate issue, the Mapuche diplomat claimed that the indigenous peoples of Chile and Latin America are concerned about the maritime dispute between Bolivia and Chile, and said that the Mapuche support the search for an amicable solution.

"We call on both governments to make efforts so that they arrive at an amicable solution. We are concerned that be no more tensions, no more disputes between neighbor countries and peoples in the region of South America and that we should all seek an appropriate path of amicable settlement of the issues," said Aucan. 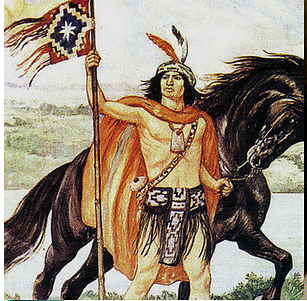 Posted by chantlaca at 4:08 PM