AIDE MEMOIRE of the President of the UN General Assembly 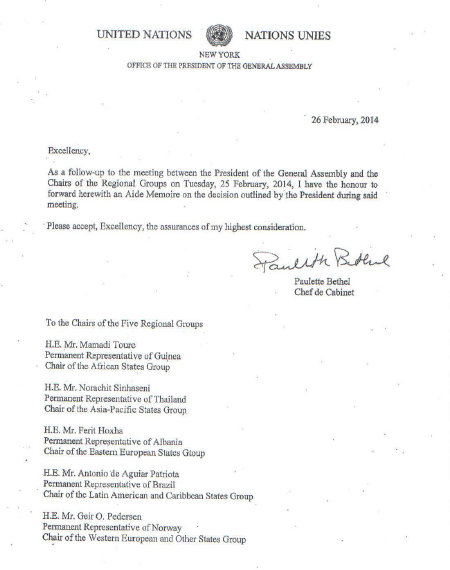 
Meeting of the President of the General Assembly, H.E. Mr. John W. Ashe


With Chairpersons of the UN Regional Groups to discuss Preparations for


The President of the General Assembly (PGA) met with Chairpersons of the five regional groups on February 25th 2014, to share with them collective   responses to the proposals which he had presented earlier regarding the appointment of Co-facilitators for the World Conference on Indigenous Peoples and to communicate his decision regarding the start of the consultations called for in paragraph 12 of the General Assembly resolution A/Res/66/296.  These proposals are contained in the Annex  to this Aide Memoire.

Responses Received from the Regional Groups

The PGA informed the representatives of the regional groups that he had received written communication from all the five (5) groups, two (2) of which indicated that they would not entertain a process co-led by a Member State and a non-Member State.

One regional group was  unable to reach consensus on any of the proposals, but individual Member States communicated their preferences directly to the PGA or to his staff.

One regional group expressed a preference for proposal No. 2, which was forward by a Member State.

The PGA also noted that he had received several written presentations from various Indigenous Groups/Representatives but without any consensus on a way forward.

The PGA also indicated that he would request the Indigenous Groups, through the Permanent Forum on Indigenous Issues, to identify appropriate representatives to undertake consultations with the Indigenous community on his behalf.  These representatives would report directly to the PGA on the outcome of those consultations, and will also be invited to share the outcomes of their consultations with Member States.  The PGA further informed that he would be responsible for any text/outcomes resulting from the aforementioned consultation process which member States will be requested to consider.

Regarding the interactive civil society briefing called for in paragraph 7 of A/Res/66/296, it is anticipated that the Permanent Forum will assist in organizing this briefing.  In this regard, member States may wish, for the duration of the aforementioned consultations, to utilize the practice of the Open Working Group on sustainable Development Goals, whereby civil society representatives are encouraged to convene meetings prior to the start of related intergovernmental discussions and to share the outcomes of their deliberations directly with member states.

The PGA informed the Regional Chairs that, H.E. Mr. Crispin Gregoire, the fomer Permanent Representative of the Commonwealth of Dominica, will be joining the staff of the OPGA as of 3 March, 2014 and has been designated as the Focal Point within the office of the PGA for all aspects pertaining to the aforementioned consultations.


Proposal from the PGA

The President also informed the Regional Chairs of two additional proposals that he had received from a member State during a recent bilateral meeting as follows:


Proposal No. 1 from a member State


Proposal No.2 from a member State


The President of the General Assembly will nol appoint co-facilitators, but instead personally would conduct the informal consultations. At his discretion, the President may call upon a member State(s) and/or a representative of Indigenous Peoples to conduct the proceedings on his behalf, if and when required.