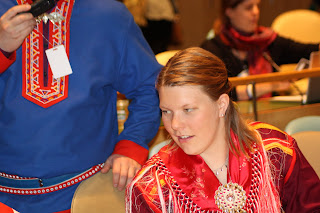 Honorable Madame Chairperson, Members of the UN Permanent Forum on Indigenous Issues, distinguished representatives of Indigenous Peoples, sisters and brothers here today,
The Global Indigenous Women’s Caucus would like to emphasize that implementation of the United Nations Declaration on the Rights of Indigenous Peoples needs to give particular attention to how rights are respected, protected and fulfilled without discrimination of any kind, including gender. In addition, as recommended in various of the UN Permanent session reports, using a gender framework in the implementation of UNDRIP is key for protecting the human rights and fundamental freedoms of Indigenous women, youth and children.
RECOMMENDATIONS
Posted by chantlaca at 4:46 PM